America’s first war dog, Stubby, served for 18 months and participated in seventeen battles on the Western Front. In February of 1918, he saved his regiment from surprise mustard gas attacks. This pit bull terrier dog was the most decorated war dog of World War I and the only dog to be promoted to sergeant through combat. 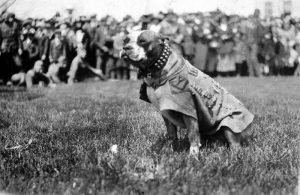 He also located and comforted wounded, carried messages under fire and even once caught a German spy by the seat of his pants after hearing a noise coming from a small patch of brush. He went to investigate and found a German spy. Stubby put his ears back and began to bark. The German began to run and Stubby took off after him, biting the soldier on his legs causing him to trip and fall. Then he attacked the soldier’s arms and finally bit and held onto his rear end. By this time some of the Allied soldiers had come to see what all the noise was. When they saw that the dog had captured a spy they cheered. He became the first dog to be given rank in the U.S. Armed Forces.

After the war, Stubby became Georgetown University’s mascot when his owner, Robert Conroy was headed to law school and took the dog along. Old age finally caught up with the small warrior on April 4th, 1926, as he took ill and died in Conroy’s arms. 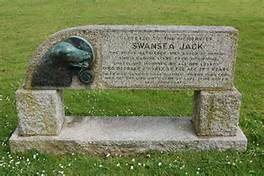 Born in Newfoundland, Swansea Jack lived in the North Dock area of Swansea with his master, William Thomas. He would always respond to cries for help from the water, diving into the water and pulling whoever was in difficulty to safety at the dockside. His first rescue, in June 1931, when he saved a 12-year-old boy, went unreported. A few weeks later, this time in front of a crowd, Jack rescued a swimmer from the docks.

Legend has it that in his lifetime he saved 27 people from the Docks / River Tawe. Swansea Jack died in October 1937 after eating rat poison. He was named ‘Dog of the Century’ by NewFound Friends of Bristol. He received a silver cup from the Lord Mayor of London and he is still the only dog to have been awarded two bronze medals by the National Canine Defence League (now known as Dogs Trust).

Jim: the “Wonder Dog” who could predict the future

Born in Louisiana in 1925, Jim displayed signs of extremely high intelligence. He was able to pick out colors a person was wearing, although dogs are apparently color-blind. He could pick out a car by its owner, color, make, or license plate number.

Jim became a hunting dog who knew which fields contained birds and which ones didn’t. Mr. VanArsdale would let Jim choose the field in which to hunt and he was never disappointed. 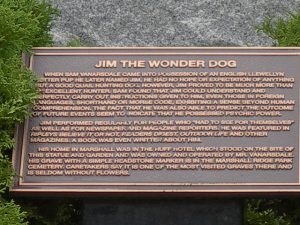 Jim was examined at the University of Missouri by a group of veterinarians and scientists. Results of the examination were normal. He responded to their requests given in Italian, French, German and Spanish. He was taken before a Greek class and given several requests in Greek which he successfully answered. Jim picked the winner in the 1936 World Series. He correctly predicted that Roosevelt would be re-elected in 1936. He also correctly picked the winner in the Kentucky Derby for seven years. And most amazingly, he could predict accurately the sex of an unborn infant.

The Wonder Dog died on March 18, 1937 and was buried in a cemetery in Marshall. A small white stone was erected over his grave bearing the inscription “Jim, the Wonder Dog.” 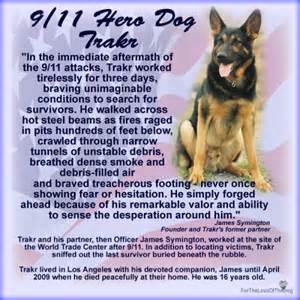 A German Shepherd born around 1992, he and his handler, Peter Davies, were called in to assist with the rescue operations after the September 11 terror attacks. They arrived at the World Trade Center site fifteen minutes after the attack, making Appollo the first search and rescue dog to arrive at the site after the collapse of the World Trade Center. At one point, Appollo was almost killed by flames and falling debris. However, he survived, having been drenched after falling into a pool of water just before this incident. Appollo started working again as soon as Davies had brushed the debris off him. He died in November 2006. 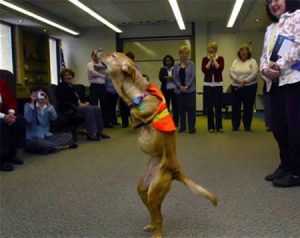 Faith Stringfellow is an amazing little dog who suffered from a birth defect. The mother dog was actually trying to terminate Faith’s life when she was rescued from a teenage boy. She only had one front leg and it had to be removed when she was 7 months because it was starting to atrophy. Faith has learned to stand and walk on her two back legs like a human.

It’s not all that unusual to see a dog stand up to greet their loved ones, but Faith remains upright and actually gets around this way. She may be the worlds first and only biped canine. Faith is now a therapy dog and makes public appearances to encourage others to live to their full potential.

6The Sheepherder Dog: Kept a sheep ranch by himself for 2 years 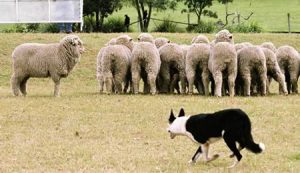 In the 1870s, a sheep rancher in New Mexico died alone in his remote home. Two years later, his death was discovered by visitors. Yet his flock of sheep were doing just fine, and had actually increased in number! His dog had been tending the flocks in his absence. The rancher had trained his dog to drive the flocks to their pasture in the morning, guard them all day, and return them to their fold at night, and he’d continued these duties when the rancher disappeared, killing some sheep as necessary for food but faithfully tending the rest.

In 1879, the New Mexico Legislature voted to award a pension to the hard-working (but nameless) sheep dog. There are no pictures of this dog. 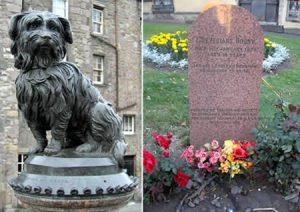 Greyfriars Bobby became famous as a symbol of loyalty in Britain. He was a Skye terrier devoted to his owner, John Gray. When Gray died in 1858, he was buried without a gravestone. Still, Bobby found the spot and stayed there, guarding the grave and leaving only for food, for 14 years. Greyfriars Bobby himself died in 1872. A granite fountain was erected in 1873 to honor his loyalty, commissioned by a countess and paid for by the RSPCA. John Gray eventually got a headstone, paid for by Bobby’s fans. And Bobby received a headstone for his grave in 1981.

Max: The collie who sniffed out his owner’s cancer

Maureen Burns in Rugby, England has a 10-year-old mixed breed collie named Max who probably saved her life. The 64-year-old realized something was wrong when Max started acting strangely. He would keep sniffing Maureen’s breath and nudging her right breast. Max’s odd behavior prompted Maureen to check her breasts and she discovered a small lump in the right one. But the growth did not show up on a hospital mammogram.

Still convinced that something was wrong, she persuaded surgeons to do a biopsy. And Maureen’s hunch was proved right when the results confirmed there was a lump – and it was malignant. She’s had surgery to remove the lump, followed by radiation treatment, and her prognosis is excellent. Mrs. Burns is convinced that she is alive today because of her dog’s keen sense of smell.

Bobbie: Traveled 2.800 miles to return to this family 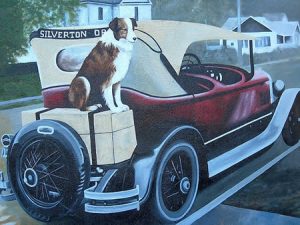 In 1923, while on a family road trip in Indiana, Bobbie —a two-year old Scotch Collie/English Shepherd mix— was separated from his owners and lost. After an exhaustive search, the broken-hearted family returned to their home in Oregon never expecting to see their beloved dog again. Six months later, Bobbie appeared on their doorstep mangy and scrawny with feet worn to the bone; he showed all the signs of having walked the entire way back alone. During his ordeal, he crossed 2,800 miles of plain, desert and mountains in the dead of winter to return home. He received hundreds of letters from people around the world and was honored with a jewel-studded harness and collar, ribbons and keys to cities.Bobbie’s demonstration of loyalty is celebrated during Silverton’s annual children’s pet parade that serves as a reminder of the special place animals and pets have in people’s lives. 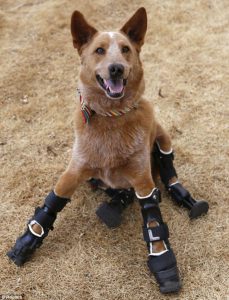 Here’s the story of Coal, an eight-and-a-half-year-old hound had his left paw amputated because of cancer. He faced being put down because his other legs would be too weak to carry him. Instead of that, his owner Reg Walker spent £10,000 to fit him with a sophisticated bionic leg, which was designed to be compatible with Coal’s own tissue. The titanium alloy used mimics animal hide, allowing the skin and the bone from above to seal the metal implant below without it being rejected by the body.

Coal is a very special dog, he goes on tour with his owner (who is a music industry security guard) and he’s the only dog to have allowed into Live 8 and the only dog that has ever been backstage at the Royal Albert Hall. Now he has an absolutely normal quality of life, which he wouldn’t have had before.