I have written my thoughts or counter-points to this article.

What Is a Doodle Dog?

By now, you’ve likely run into more than a few Doodle dogs. Labradoodles, Goldendoodles, Bernedoodles, Aussiedoodles—the list of quirky names for these designer dogs or hybrids goes on and on. But no matter how fancy the terminology is, it’s still a mixed-breed dog.

Mixed breed dogs have been the start of new breeds, For instance, there has been a lot of talk about Labadoodles becoming a breed. It will take a few generations of the breed for it to be considered.  Long enough for standards to be set. Who knows which ‘breeds will persist. The magic comes when when you can breed two of the same dogs persistently.Even though Cockapoos were first they cannot produce offspring that are consistently the same as the first generation.

Almost all breeds came from mixing breeds. There are few dogs that have been pure. Very old breeds like Basenjis,Suluki, Pharoh Dogs and a few more come pure breeds.

A Doodle is a cross between a Poodle and another dog breed. (There are also Oodles and Poos, such as Schnoodles, Yorkiepoos, and Cockapoos.) The original Doodle was a Labradoodle, bred in the early 1980s by Wally Conron while working as a puppy-breeding manager for the Royal Guide Dog Association of Australia. His goal was to create an allergy-free guide dog for a vision-impaired woman, whose husband was allergic to dog hair. Two years and 33 trials later, Conron successfully crossed a Standard Poodle with a Labrador, and the Labradoodle was born. 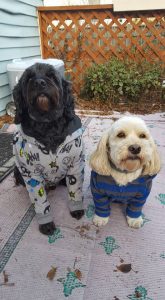 I don’t believe that this is true. Cockapoos were first seen in the sixties. My brother had one he called Tinkler. My room mate in Chicago also had one.. It was really cute until she ate part of a paper back book and died from ink which is poisonous .

Over time, the Labradoodle became a popular breed and idea. But with popularity comes overbreeding. Unfortunately, the designer dog craze got a little out of hand. Soon enough, any breed mixed with a Poodle was being advertised as “hypoallergenic.” This was very appealing to puppy mills. Suddenly, there were Doodles everywhere.

All breeds have a rocky start. My cockapoos are hypoallergenic and our highly allergenic son-in-law has no problems with them. On the other hand, he can’t touch our cat and tries not to touch anything hairy. I do now that not all doodles, etc, are hyoallergenic.

These dogs also had a reputation for being low shedding, laid-back, good natured, smart, family dogs—the best of both breeds in the mix. The problem with genetics is that there’s no guarantee you’ll only get the good genes. As Conron said in an interview with The Sun, “For every perfect one, you’re going to find a lot of crazy ones.”

There are other authorities that think that these dogs, as a result live longer, which is proven. Cockapoos live to between 16 and 18 years old. They think these dogs have more vigor.

Doodle dogs became very attractive to buyers, with their reputation preceding them. But again, when you take the genes of two different breeds, you risk not only losing the desirable traits of each breed but also inheriting health issues and undesirable traits. Let’s take the Labradoodle, for example. Labradors are predisposed to hip dysplasia and eye conditions, such as progressive retinal atrophy (PRA), cataracts, and retinal dysplasia. Poodles are predisposed to hip dysplasia, PRA, Von Willebrand’s disease (a bleeding disorder), and Addison’s disease. Roll the dice in the gene pool, and you can end up with any combination of these conditions, or none of them at all. That’s the chance you take with a mix of two breeds.And, keep in mind, there is no such thing as a truly hypoallergenic dog. Allergens are carried in dander (dead skin cells), saliva, and urine, so they are impossible to fully avoid. Some dogs produce less allergens or shed less than others, but no dog is void of allergens. Allergy sensitivities vary from person to person, and dogs vary individually in their levels of allergens, so you never truly know if, or how badly, you will react to a certain dog. 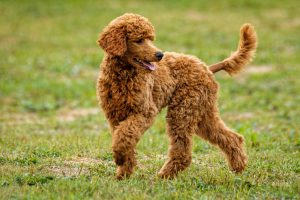 I am not anti-Doodle in any way. I love mixed breeds, as they combine appealing genetic traits from multiple sources. Doodles vary in size, shape, color, and coat texture, all depending on their mix. But it is important to educate yourself before diving into Doodle land. Be sure to research the specific breeds, and how they are compatible with your desires. Hopefully, you will appreciate your dog’s individuality and uniqueness, no matter what type of Doodle he or she may be.

Doodles, etc, are bred with forethought. These are not mutt’s off the streets. Nothing is bad with mutts but you can only guess what breeds have gone in to making the dog you get.

Natasha Feduik is a licensed veterinary technician with Garden City Park Animal Hospital in New York, where she has been practicing for 10 years. Natasha received her degree in veterinary technology from Purdue University. Natasha has two dogs, a cat, and three birds at home and is passionate about helping people take the best possible care of their animal companions.