Animal hoarding is keeping a higher-than-usual number of animals as domestic pets without ability to properly house or care for them, while at the same time denying this inability. Compulsive hoarding can be characterized as a symptom of mental disorder rather than deliberate cruelty towards animals. Hoarders are deeply attached to their pets and find it extremely difficult to let the pets go. They typically cannot comprehend that they are harming their pets by failing to provide them with proper care. Hoarders tend to believe that they provide the right amount of care for their pets. The American Society for the Prevention of Cruelty to Animals provides a “Hoarding Prevention Team”, which works with hoarders to help them attain a manageable and healthy number of pets.  W

Signs that may indicate someone is an animal hoarder:

·         They have numerous animals and may not know the total number of animals in their care.

·         There is a strong smell of ammonia, and floors may be covered with dried feces, urine, vomit, etc.

·         Animals are emaciated, lethargic and not well socialized.

·         Individual is isolated from community and appears to be in neglect himself.

·         Individual insists all animals are happy and healthy—even when there are clear signs of distress and illness. 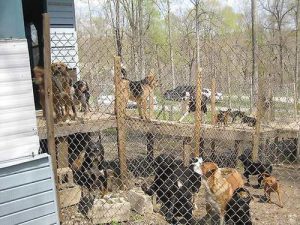 Research shows many hoarders are beginning to set themselves up as “rescue shelters,” complete with non-profit status. They may appear to be sensible people, persuasively conveying their love for animals and readiness to take those who are sick and with special needs.

Here are several signs that a rescue group or shelter may involve a hoarder:

·         The group is unwilling to let visitors see the location where animals are kept.

·         The group will not disclose the number of animals in its care, and makes little effort to adopt animals out.

·         More animals are continually taken in, despite the poor condition of existing animals.

·         Legitimate shelters and rescue organizations are viewed as the enemy. Animals may be received at a remote location (parking lot, street corner, etc.) rather than at the group’s facilities. 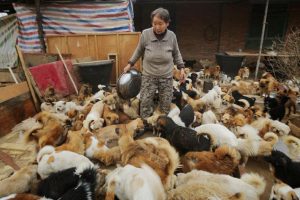 Criminal prosecution of animal hoarding can be a difficult process and may not be the most effective route. Such cases are difficult to successfully prosecute and, once litigation ends, the hoarder is likely to resume collecting an excessive number of animals unless closely monitored.

Some say prosecution isn’t the answer because hoarders are often emotionally troubled rather than criminally inclined. In some cases, judges can impose conditions that actually help the hoarder, such as by requiring counseling, or by prohibiting the person from having animals. 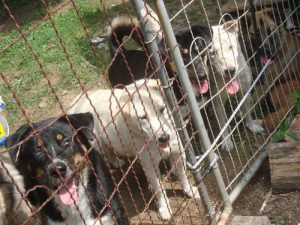 Animal hoarding is covered implicitly under every state’s animal cruelty statute, which typically requires caretakers to provide sufficient food, water and veterinary care. Only two states, Illinois and Hawaii, currently have statutory language specifically addressing animal hoarding. With guidance from the ASPCA, the Illinois Companion Animal Hoarder Act was created in 2001 to create a legal definition for “companion animal hoarder” and mandate counseling for those convicted of animal cruelty who meet the definition. Animal hoarding itself is not prohibited by the statute. Hawaii’s 2008 law is the only state law specifically outlawing animal hoarding. It does not mandate psychological counseling for convicted hoarders or restrict future animal ownership. Anti-hoarding legislation has been proposed, but not passed, in several other states.

Hoarding disorder can cause a variety of complications, including:

·         Unsanitary conditions that pose a risk to health

·         Injury or being trapped by shifting or falling items

·         An inability to perform daily tasks, such as bathing or cooking

Why is animal hoarding a community issue? 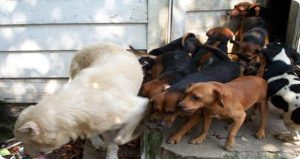 Neighbors’ complaints about mistreated or neglected animals or about the stench emanating from the hoarders home or sprawling rodent or insect infestations may be the first indication that something is wrong. Some animal hoarding cases go undetected until an elderly hoarder passes away. The hoarder and any other residents, including minor children and elderly in the care of the hoarder, also suffer from the horrible living conditions. Self-neglect, child neglect, and elder abuse have accompanied the hoarding of animals; in fact, social service agencies are often a source of animal hoarding complaints. Inoperative utilities and appliances may compound the lack of sanitation, rendering the dwelling uninhabitable by normal standards. Excessive clutter and overcrowded conditions can contribute to fire danger, while air ammonia levels in hoarders’ residences have exceeded levels considered safe.

How does animal hoarding impact our animal shelters?

Animal hoarding cases are a drain on our community animal shelters. The majority involve repeated investigation of the same individual by animal control officers. Additionally, such a large influx of animals is more than our community animal shelters can handle, both logistically and financially. Many shelters lack the space to house such a large number of animals, particularly as many may not be healthy and may require isolation and/or medical care. Moreover, a shelter may need to house the seized animals for several months, leaving little space to house stray and adoptable animals and straining other resources that would otherwise be used to serve the community.

Why is a special law needed?

Animal hoarding is a complex and poorly understood problem that transcends the jurisdiction of those charged with enforcing animal welfare laws. It is a community issue, often involving issues of public health, mental health, zoning, building safety, and sanitation. Yet the burden is often solely that of animal control personnel. Even with the existing laws regarding animal cruelty and ordinances restricting the number of pets allowed per household, these cases are difficult to resolve. Those charged with enforcing our animal protective laws often lack the tools and resources to intervene. The costs involved in holding the seized animals while the case is being resolved are often beyond the budgets of our community shelters–one hoarding case has the potential to bankrupt a shelter, which provides a critical service to the community.

What would the law do?

1.   Identify and define companion animal hoarding as a type of animal cruelty. This will aid animal control officers and law enforcement officials in addressing the large-scale cruelty associated with hoarding.

2.   Allow creative solutions to address the costs involved in caring for seized animals while the case is being resolved. Those charged with animal hoarding shall be required to post a bond, or other financial assurance, to cover the cost of feeding and housing any animals that are seized and for providing them any needed veterinary care. Alleged hoarders will also have an option of permanent relinquishment in lieu of posting bond, however voluntary relinquishment will have no effect on any proceedings in the matter. At their discretion, animal control personnel may impound animals on-site, with regular welfare checks.

3.   Mandate psychological counseling for the hoarder. Animal hoarding may be a sign of serious mental illness, thus upon conviction the hoarder shall undergo psychological assessment and treatment at their own expense. The emphasis is on helping the individual so that the situation does not redevelop, as recidivism is high for animal hoarders.

4.   Allow limitations on future pet ownership. At the court’s discretion, limitations or prohibitions on future companion animal ownership may be imposed. This will also give animal control officers the authority to monitor the care provided by convicted animal hoarders.

How would this law impact farmers, ranchers and others who have a lot of animals?

This animal hoarding law is separate from the general animal cruelty statute, as it only applies to animals kept for companionship. Those who maintain large numbers of animals for utility purposes, such as farmers and ranchers, will not be subject to the provisions in this law. As for pet breeders, rescue groups, or others with a large number of companion animals, they would not be cited for animal hoarding unless they failed to provide minimal care for the animals in the possession, as outlined in the law.

Isn’t this just a way to limit the number of pets people can have?

No. This law isn’t about numbers; it’s about cruelty, neglect, and failure to provide minimal care to companion animals. While county or local ordinances may impose restriction on the number of pets people can have, this law enables limitations to be imposed only on those who have been convicted of animal hoarding.

Won’t requiring a security bond just force people to give up their pets?

No. The bond reflects the costs the alleged hoarder would incur in taking proper care of the animals themselves. Inability to post a security simply reflects a situation where the individual has become overwhelmed by the number of animals in his/her care.

·        The overcrowding, confinement and lack of socialization for hoarded animals often results in extreme psychological stress.

·        Animal hoarders often have a variety of psychological disorders