Drugs to Help Stop the Vomiting

Throwing up can have serious health consequences — in addition to proving uncomfortable and debilitating.  Our little Scooter (20 lbs) throws up every time we take him the car. We have tried Benadryl, and Dramamine. The shame of it is we like going to the parks for walks. Lucky for us we can walk to the beach and the bike path in five minutes. I was thrilled to find this info and next time we go to the vet I’m going to see about getting a medication for him.

Well, we went to the vet for Poo’s annual and Scooter’s  and his heartworm tests.  While we were there I asked about medication for Scooter’s car sickness.  She provided us with eight doses. She said the pill wouldn’t work quickly enough for the trip home. So he got a shot. Guess what, we didn’t make it. We put him in the back seat with his brother. They always want to ride together.  Another clean up.

What dog doesn’t love a car ride? Everyone has seen — and can picture — a dog happily hanging her head out the window of a car, loving the feel of the breeze as the auto whizzes along.

But the stereotype of the pet who lives for a drive with the window open is belied by the fact that some dogs experience motion sickness. Maybe yours is one of them. If she is, perhaps she’s eager to go with you and readily hops into the car but hunkers down in the back as soon as you get going. If that describes your pet, he may feel nauseated in a moving vehicle. Perhaps he even throws up during car rides. 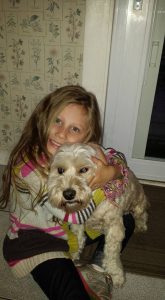 That’s just one of the many things that trigger vomiting in dogs. There’s also gastrointestinal upset, kidney disease, chemotherapy, pancreatitis, and a host of other conditions that could cause your dog to vomit. Indeed, vomiting is one of the most common reasons people take their dogs to the veterinarian. According to at least one estimate, 1.2 million dogs suffer from vomiting caused by motion sickness, and another 2.8 million experience vomiting from other causes. A veterinarian might easily see, on average, 30 cases of vomiting per month, or one a day.

A queasy dog is a miserable dog.

A single episode of vomiting is no big deal for a dog. It won’t make her feel good, but it isn’t likely to cause any harm. Repeated vomiting, however, can lead to serious dehydration and electrolyte imbalances that, if severe enough, can prove life-threatening and land a dog in the hospital for intravenous fluids and vigilant watch.

The physiologic mechanisms that induce vommiting

There are two pathways that cause vomiting in dogs, central and peripheral. The central pathway is mediated by what Tufts veterinarian Michael Stone, DVM, calls the stimulation of the “vomiting center” in the brain. Motion sickness or a buildup of toxins in the blood, say, from kidney disease, can induce the urge to throw up through the central pathway. The peripheral pathway involves irritation of the gastrointestinal tract either in the stomach or intestines. Perhaps spoiled food makes a dog feel sick, or there’s some kind of problem with the mechanical workings of the GI system, or viruses or a bacterial imbalance brings on the nausea that leads to vomiting.

Either way, the vomiting should be stopped, both to relieve a dog’s feeling “seasick” and to head off any untoward effects that could potentially make “uncomfortable” turn to “dangerous.”

In the past, the drugs available to veterinarians to quell vomiting — such medications are called anti-emetics — tended to be products labeled for people that were prescribed off-label to dogs. That is, they were not approved for use in dogs but were used by veterinarians because they were found anecdotally to help. The anti-emetics most frequently prescribed by vets were either not very effective or caused sedation.

Dogs don’t turn the unflattering shade of green that people do when they’re experiencing motion sickness, but there are some signs of dog travel sickness you can learn to identify. These include:

We know when Scooter is going to get sick, he drools excessively and up comes whatever he’s had. If we don’t give him anything, it is just lovely yellow liquid, all over. I carry him in my lap, not safe, and I have a towel covering me as much as possible. I can’t take our ‘boys’ anywhere by myself.

Fortunately, in the past few years, new drugs have come to market that provide more options to relieve dogs of vomiting and have also proven more effective. They can be obtained only with a prescription.

One, maropitant (Cerenia), works on both the central and peripheral pathways of nausea and vomiting induction, making it effective for treating vomiting from a wide variety of causes. It is given either as an injection or a tablet that’s swallowed. The dog takes it only once daily, as opposed to many of the drugs approved for humans, which may have to be given to a dog as many as two to four times a day. It tends to start working inside of an hour, providing fast relief. In clinical trials, there have been reports of side effects ranging from excessive salivation to muscle tremors. But Dr. Stone says that in practice, such reactions are rare (although many dogs experience a stinging sensation after injection). Maropitant is used regularly to stop vomiting caused by such illnesses as gastroenteritis (inflammation of the gastrointestinal tract often resulting from infectious agents that cause abdominal discomfort or pain) and kidney disease. Many dogs with kidney disease, especially as the illness progresses, experience more and more severe vomiting that needs to be addressed if the dog is going to continue to have a decent quality of life for as long as possible.

A second drug, dolasetron (Anzemet), is off-label for dogs but nonetheless acts well against central (brain-induced) causes of vomiting and is generally used for nausea and vomiting resulting from chemotherapy or blood-born toxins. Dogs with cancer get lower doses of chemotherapy than people because with people, the aim is to achieve a cure if possible whereas with dogs, it’s to extend life by using doses that limit the chance of severe side effects such as vomiting. Still, some dogs do become nauseated and vomit as a result of chemo, and dolasetron is given not just to treat nausea but also to prevent it. When the measure is preventative, a dose will be administered about 30 minutes before the chemo begins. This drug is also given post-operatively. Some dogs, just like some people, vomit as an aftereffect of being administered anesthesia. Dolasetron is also given in those cases where dogs vomit from radiation therapy. In addition, it can be used with ongoing medical illnesses that cause nausea and for acute cases of gastroenteritis.

Dolasetron stays in the body for a long time, as does maropitant. A single dose will last from four to nine hours, meaning that, it, too, needs to be given only once daily — sometimes twice.

The bottom line is that if your dog is prone to nausea and vomiting for whatever reason, there’s help. Chances are that with the strong effects of the new line of anti-emetics on the veterinary market, she doesn’t have to go uncomfortable or in danger of losing too much fluid. That was certainly the case with a 14-year-old Cairn terrier who had been brought to the Foster Hospital for Small Animals at the time we interviewed Dr. Stone. She was taken in by her owners because of multiple episodes of vomiting. But, says Dr. Stone, “since being admitted to the hospital and treated with both dolasetron and maropitant, all vomiting has stopped.” n