Labadoodles, Goldendoodles, Cockepoo, Shih-poo, Cacapoos, Maltipoo, Schnoodle, Puggles, Yorkipoo, Poochon, Bernedoodle and Aussiedoodles plus many more.  I think that almost every breed has been bred to a Poodle.  You really need to look at the characteristics of both breeds to make sure you like both.

People seem to have a fascination with Poodle mixed breeds. Why? Who knows; maybe because Poodles are very intelligent and do not shed. Keep in mind however, if you mix a Poodle with a dog that does shed the Poodle mixes may shed, if it inherited the shedding trait from the non-Poodle parent. Many different Poodle mixes are emerging. And it’s not just Poodle mixes, many different “designer” dogs (as the media has labeled them) are being bred. What is a “designer” dog, you ask?

Please Note: A hybrid dog is not a BREED; it is a hybrid, which means it is a mix of more than one purebred dog. 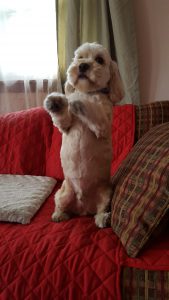 Scientifically speaking, the term “hybrid” is incorrect as all dogs are a sub-species of wolf (Canis lupus familiaris) and as such, it is impossible to have a hybrid as they are two of the same species. Although technically incorrect, the term “hybrid” is the name which is predominantly used for these mixes and therefore it is the name we will also use when referring to them. 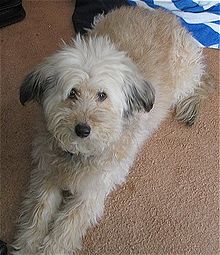 A Cross Between a Wheaton Terrier and a Poddle – Whoodle

The idea was to make dogs hyper-allergenic  and more vigorous.  There are two schools of thought.  One is that intermixing two genetic pools will ad vigor, health and fewer health problems.  On the other hand there is a school of thought that feels that you will have no idea as to what the dogs will look, behave and that all the problems of both breeds will be visited upon the poor puppies.  We will delve into this further.

Our boys are healthy and happy, as long as someone is with them.  They are very friendly, but still good watchdogs.  Anything out of the ordinary can set them off.  Have we just been lucky? 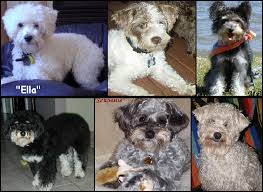 One thought on “Some Popular Poodle Mixes”