My thoughts on the ongoing battle between purebred and mixed breeds.

In a past life, I bred and showed Basenjis.  We research one breed in every group.  We visited Match and Point Shows. We talked to breeders and watched the groups. We finally set put sights and Basenjis. Then we picked Basenjis. They are easy to group for a show.   It was really involved. No Internet, no computers. It took a long time. Once you picked a breed you need to research breeders. After all of that, we went to a lot of dog shows, spoke to many breeders and found a breeder. We bought My Own Super Star. 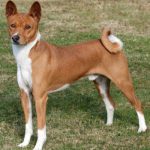 Basenjis aren’t cuddle bunnies. They tend to be a little aloof. Not easy to train. They are beautiful and make great pets. They don’t bark, they chortle. Hard to explain. My first husband and I toured New England and as far west as Ohio. I really enjoyed the excitement and won often enough to make the trip worthwhile.  We researched breeds then how many were in each class.We started with local shows called matches Then we bought a bitch to mate with Star. We had six puppies. We had one sold at the first match that we could take them to. We sold Another was bought by a friend who was putting together a rare dog breed show. We gave my mother-in-law one… She fell in love with the runt of the litter We kept the best male and female. Unfortunately the bitch we kept hated showing. The male broke a leg and couldn’t after – he won the Best in Group.

Now we have two dogs. Both of them are Cockapoos. They cost as much or more than what you would pay for a pure breed Why would we do that?  Their personality is wonderful. They don’t shed. Yes, they have to see a groomer every five or six weeks. It’s expensive.

We think that they both came from puppy mills. I know that I shouldn’t have anything to do with puppy mills. But  I couldn’t find anything in the local area. Tom fell in love with a black male. (We love black pets) At ‘a pet store.’

When he was three years old I had surgery and was going to be out of work for three months. So. I went looking for a dog to keep Boo company. We found a perfect candidate. A Mini Poodle. We took Boo with us and they had a good time. They gave him to someone else. Also, their rate was $400, plus other fees.

Next, we used a breeder’s guide

My husband (now) wanted a puppy at six months old or older. We got a hold of a breeder in Missouri. He said he said there was only one breeding pair. When we got the puppy he wouldn’t come out of his crate. We left the crate in the backyard with Boo and Scooter Binks came out. He was supposed to be potty trained. He pied all over the house. When we thought we had gotten the problem under control he would squat and pee while we watched.

He is half the size and can run under Boo with no trouble. He growls (talks to his brother) and starts fights over dry kibble, which he doesn’t eat anyway. He looks to cuddle up with Boo. They really love each other. I love both of them quirks and all.

As the 142nd Westminster Dog Show prepares to name another frisky Best in Show champion on Tuesday night at Madison Square Garden, it is probably a good time to address the simmering, under-reported feud that has always existed between show-dog owners and rescue-dog advocates.

Having covered this show for years, and having been exposed to more than my share of rescue-dog owners, I would sum up their points of view this way:

That’s the war, in a nutshell – a battle of class, demographics, ethics and several other components. There is a great deal of stereotyping on both sides, a few truths and too many false perceptions.

“I understand that on the rescue side, they see animals dying,” says Gabrielle Vannini, who works with Dallas Animal Services and has fostered about 300 animals over the last six years. “But too often, both the breeder and rescue owners try to make this issue black and white.

“Irresponsible placement,” she says, “is a problem on both sides.”

Vannini is the best possible mediator for this debate because she owns mixed-breed dogs but also shows locally a pair of Icelandic sheepdogs who happen to be rescued purebreds. She has been immersed in both worlds and has heard some of the negative stuff from both sides.

She has known show people who harp on a negative anecdote about the bad behavior of some mixed-breed dog. Vannini has also been rejected by rescue shelter workers for adoptions because she already owns purebred dogs that are “intact,” meaning they have not been neutered.

In the end, it’s your choice to make, just remain informed before you do.

“People who haven’t been to a dog show, they may see it as a negative thing,” Vannini says. “They’ll say, ‘Oh, those poor show dogs.’ But they’re normal dogs. They’re loved. They love to show, get food while they’re in the ring. They enjoy it. They live stimulating lives, getting trained. It’s a lot more fulfilling life than laying on a couch, getting fat. It’s not abuse.”

It is astonishingly true, and horrifying, that many of the top-tier, dog-show owners you’ll see at Westminster spend hundreds of thousands of dollars per year on handling, travel, and promotion for their animals. But showing can also be done at a more reasonable cost, at a lower, local level.

Meanwhile, there have been countless examples of successful rescue dog adoptions, which are more likely to happen if families enter the shelters with an education and the right attitude.

“If somebody just wants a family pet, go visit your shelter. There’s no reason not to do it,” Vannini says. “But you don’t want people adopting a dog just because they feel sorry for it.”

Bad endings to these adoptions have increased a bit with the import of dogs from out of the country, where the animals may have been badly mistreated or malnourished. The backgrounds of those dogs are often not known. In addition, families may adopt a puppy they don’t understand will grow quite large as an adult. Vannini estimates that about 40% of the animals she deals within shelters are pit bull mixes.

Adopters, she says, shouldn’t get hung up on breed history if the dog is not a purebred.

“If you want a breed with a specific trait, you’ll find a mix of that breed is much less likely to have that trait,” she says.

Meanwhile, you have permission to enjoy the Westminster show – the perfect struts and coiffures of the golden retrievers and Irish setters – knowing these animals are generally pampered, not tormented.

And there is always that common enemy for both the show-dog owners and the rescue-dog owners: Everybody hates the puppy mills. What about the poor puppies? I think that they deserve homes. If a puppy mill shuts down the dogs that are rescued should get good homes.