I just had to share this story, a happy one for a change. 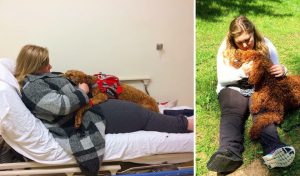 Sinead Ellis is 25 years old and lives with Parkes Weber Syndrome (PWS), a rare congenital condition. There is currently no cure for PWS. The U.S. National Library of Medicine notes that PWS causes arteries and veins to form abnormally, often causing excruciating pain and sometimes even heart failure. In addition, PWS often causes one limb to grow abnormally large compared to its match. In Sinead’s case, her right leg is almost two times larger than her left leg.

Sinead deals with her condition with grace and good humor, but perhaps most life-saving has been her dog, Paddington. According to The Dodo, this sweet poodle is in training to become a certified service dog, but he’s already changed Sinead’s life. Paddington has already not only healed a literal hole in Sinead’s right foot, but he has helped with her anxiety, balanced Sinead on walks despite her legs being different sizes, and even learned to monitor Sinead for signs of internal bleeding.

The hole in Sinead’s foot had been there for more than 10 years. Despite numerous medical interventions, doctors were unable to permanently close it. However, Paddington quickly began working on the foot after he joined Sinead’s life in 2015. Paddington began holding Sinead’s foot every day for an hour. He did this for more than three weeks – and managed to close the hole! 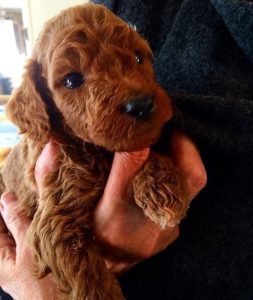 Photo Credits:Sinead Ellis
Paddington also helps manage Sinead’s anxiety. There’s a technique human therapists use called “deep pressure touch” that Paddington seems to emulate in the way he holds Sinead. She told The Dodo that Paddington “is the most Velcro dog ever,” and that’s a good thing. Deep pressure has been shown to reduce anxiety in people, including those who have autism or ADHD. Pet parents might be most familiar with deep pressure as a way to help animals, since it’s the theory behind the popular ThunderShirt. Well, deep pressure from Paddington’s canine hugs seems to help Sinead! Paddington can sense when Sinead’s anxiety is acting up, and he’ll leap into action with a soothing hug that calms Sinead down and helps keep the worst of the anxiety at bay.

Because Paddington’s hugs reduce Sinead’s anxiety, he’s also able to help her go on walks and stay balanced despite her uneven legs. Sinead told The Dodo, “I had gotten to the point with my anxiety that I couldn’t leave my house,” Sinead said. Now, because of Paddington, that’s no longer the case. Plus, Paddington has inspired Sinead to start a Facebook page and Instagram account featuring the loveable dog.

Paddington also has even learned to monitor Sinead for internal bleeding that can occur as a result of PWS. The internal bleeding would cause chemical changes that Paddington smells. He knows to then wake Sinead up if she’s asleep so that she can get prompt medical treatment.

With all that Paddington has learned, he still pays attention to Sinead’s foot. Sinead told The Dodo that she thinks Paddington can hear her blood flowing through that foot to her heart. Sinead noted on Facebook that a service dog is “definitely not for everyone,” but in her case it’s obvious that Paddington has been a constant life saver.